Xitive has announced the release of Stochastik Drum Machine, a new drum machine app for the iPad. 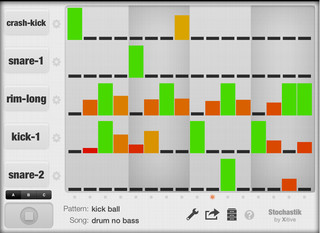 Stochastik Drum Machine is a full-featured drum machine with one outstanding difference –– unlike any other drum machine, Stochastik lets a user set a probability that a given note will trigger. That means far greater variety in even a simple percussion pattern.

Once Stochastik users add chance into the mix — which is the meaning of the word stochastic — they can generate thousands of unique variations automatically. Aaron Blohowiak, president of Xitive and lead developer on the Stochastik project said, “As our slogan for the Stochastik app promises, no more boring loops!”

Stochastik Drum Machine not only introduces this innovation of stochastic process to create dynamic rhythm patterns, it is a fully featured drum machine.

Additional functions and features currently in development include MIDI Sync, MIDI Out, Mute & Solo for each instrument, exporting each drum as a separate track, and many other enhancements.

The Stochastik Drum Machine for iPad is available to purchase for the introductory price of $4.99 USD.