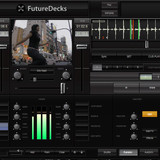 Xylio has released version 2.0 of FutureDecks Pro, a DJ mixing software for Windows and Mac.

With FutureDecks Pro you can really mix your songs, nothing else needed but your imagination.
Beat-matching is just a click away and also are seamless beat-aware loops, effects and many other things.
All these thanks to a brand new audio engine.