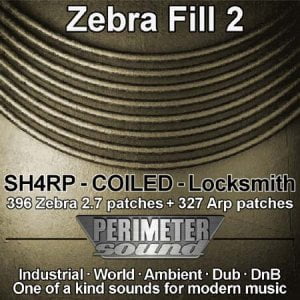 Get this triple batch of new sounds for your productions. Some of these patches were used in the ‘Experimental Dubstep’ & ‘Ambient Glitch’ series from Producer Loops, as well as in ‘World Tek’, and some recent SoundSpice collections like ‘Other Space Industrial’, ‘Dub Extraction’ and some yet unreleased sets.

Just like with the original Zebra Fill collection – Each set has a slightly different focus, and each set definitely has some new and different programming techniques used. So no matter which one you open first, you are bound to hear something you will want to record.

The bundle pack is available at a 20% discount with coupon code ZEBRA through August 21st, 2016.