zenAud.io has announced a Flash Sale on its award-winning ALK2 sequenced looper for Mac. 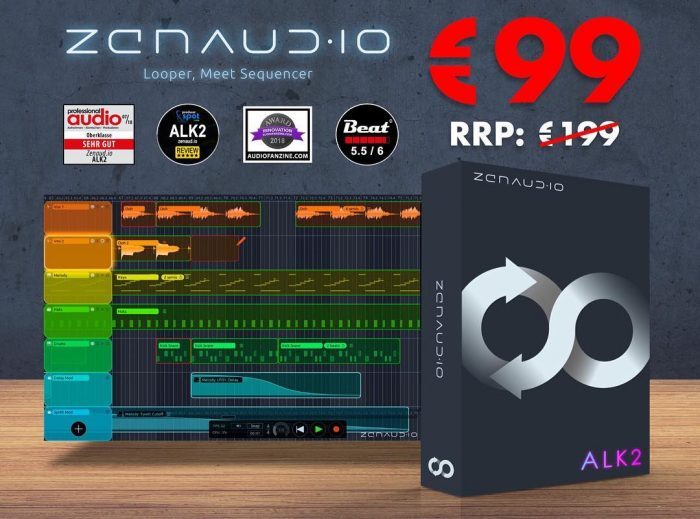 Zenaud.io ALK2 is a linear sequencer for audio and MIDI files, including automation, VST support and routing, as in conventional DAWs. The difference, however, is that ALK2 is optimized for loop-based production.

This sequenced looper allows users to pre-create an arrangement of clip shortcuts, name them (Chorus 1, Verse 2, etc.) and automate them with effects, but the audio content is filled in later, during the real-time performance. In addition, the track routing is dynamic, so for each clip the audio interface can use different inputs and outputs.

ALK2 will fill the correct clips with the real-time audio content, and because the clips are linked to the arrangement, the musicians can focus on their performance.

zenAudio has just launched version 2.1.1 of ALK2 and ALK2 Solo, which comes with graphical adjustments that allow for significant performance enhancements including lower buffer sizes (less latency) and CPU improvements of up to 30%.

Users will now find a “High Definition Graphics” toggle switch in ALK’s preferences pane, switched off by default. This disables glow FX and limits frame-rate to 30 FPS. Those who wish to retain ALK’s original graphical look can re-enable this option at any time. Users can also expect significant reductions in GPU temperature and fan RPM.