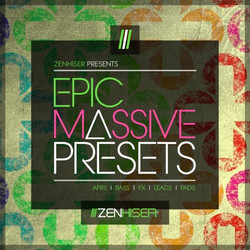 It’s finally happened, a preset pack that covers nearly all genres! 100+ NI Massive presets designed exclusively to fit as many genres a possible, plus doing it in such style and quality this could quite simply be the best Massive preset pack ever released. We don’t often brag this much or call our catalogue epic here at Zenhiser but it’s once in a blue moon that a preset pack so epic arrives that it’s the name it deserves, honestly these massive presets are absolutely awesome. It doesn’t matter if you produce Electro House, House, Minimal Tech, Chill Out, Disco, Progressive House, Dubstep, D&B, Breaks, Glitch Hop, Techno, Trance or even Funk this is the preset pack for you.

So what do you get in ‘Epic Massive Presets’, simple, killer Aprs & Motions, huge Bass sounds, sonic FX, incredible Leads, lush Pads, essential Synth and Key sounds. Each preset also has the macro presets it deserves with all fx tweaked into the preset to deliver high end sounds without any fiddling or knob twiddling. It doesn’t matter what type of producer you are, this Massive preset pack is for you….. period!