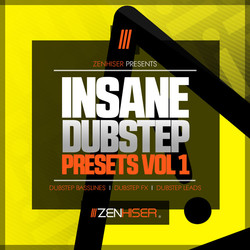 Zenhiser has launched Insane Dubstep Presets V1, a collection of 100 dubstep presets for the Massive synthesizer instrument by Native Instruments.

‘Insane Dubstep Presets V1’ contains 100 elusive massive presets, we decided to concentrate on bass presets first as this is the gritty underground sound most producers will be looking for, then we layered the preset pack with mind altering fx presets and finished it off with a compact selection foundation building lead sounds that shout & punch like no others.