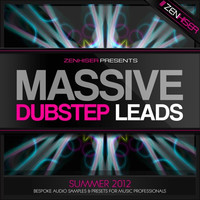 Zenhiser has announced the release of Massive Dubstep Leads, a sound library featuring a collection patches for Native Instruments Massive and audio loops.

We’re going full on here at Zenhiser with type specific sample and preset packs for Dubstep.

In the evolutionary status we’ve brought you Massive Dubstep Basslines & Massive Dubstep Sounds so what’s next on the list, well how about a shit hot collection of Ni Massive Dubstep Lead presets plus an awe inspiring aray of Dubstep lead loops ready to drop into your mix.

Sounds pretty tasty doesn’t it, 50 exclusive massive presets designed solely for the harder side of dubstep and 50 wav loops of mind bending goodness ready to rock any dubstep track.

The sound pack is available to purchase for $25 AUD.