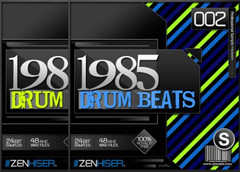 We’ve reached the mid 80s and boy do we have two great 80s drum beat packs for you.

‘1985 Drum Beats 01, 02’ cover the incredibly popular year of 1985 documenting all the best drum loops and rhythms that 1985 had to offer. As with all our 1980’s drum beat packs every loop has a slightly different spin on it allowing you something fresh and exciting within your music productions whilst still holding true the sound of the 80s beat.