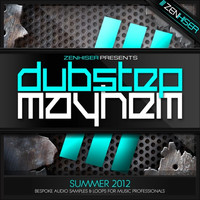 Zenhiser has announced Dubstep Mayhem, a collection of 180 samples for dubstep music production.

This sample pack is the latest in the Zenhiser series of Dubstep sounds that are currently blowing bass pins on most club dance floors worldwide. It’s an obliterating array of Dubstep riffs, drum beats and dubstep fx, all programmed and mastered so all you have to do is import the wav files and get ready for your next dubstep hit.

There’s no faff in this sample pack just straight forward dubstep riffs with beats categorised and ready to work with the riffs, plus a tasty 30 dubstep fx for your breakdowns and build ups. Totalling 180 dubstep sounds this pack is great value for money when you realise that just a couple of the dubstep riffs are worth this price alone. Dubstep Mayhem takes a slightly different approach supplying some high end rockin loops rather than the traditional dubstep groove thus giving you a new edge in your dubstep productions.

The sample pack is available to purchase for $30 AUD.