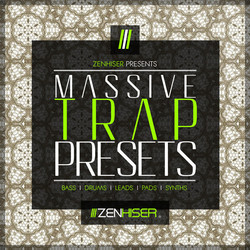 It was only a matter of time before some serious Trap presets were created in the Zenhiser studio for Native Instruments Massive Synth. And after months of heavyweight programming ‘Massive Trap Presets’ was born. 100 smouldering sounds designed for booty shakin’ tracks and show stopping rhythms.

Zenhiser has perched itself over the last few years at the forefront of Massive presets supporting some of the biggest producers worldwide on their endeavours to find deliver the finest tracks, and with ‘Massive Trap Presets’ we’ve raised the bar once again. Dedicated to all the sounds which drive your boomin’ productions this is a preset pack no Trap producer should ever be without.

The soundset is available for purchase for $30 AUD.