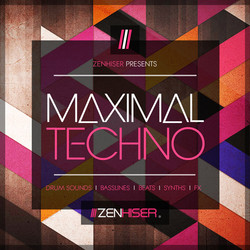 Delve into the underground world of Maximal Techno where pounding drums, tripped out synth lines and mind altering basslines are a standard. 654 essential techno samples makes up this unique techno sample pack including a complete array of drum sounds, percussive loops, basslines, beats, synth loops and even top loops. Ranging from gritty percussive hooks through to analogue warehouse style hooks ‘Maximal Techno’ is the one stop shop for techno producers looking to diversify their range of techno sounds.

This truly is the underground sound of Techno, it’s that after-hours inspired mind meltdown mixed with the rumbling peak time power of Techno dance floors. We’ve even decided to split the techno sample pack into two bpm’s, 124 & 128 giving the end producer a really broad range of techno styles to pick from. All samples as usual are 24bit 44.1khz wav files, mastered to absolute perfection and both bpm and key tagged within the filename for ease of use.