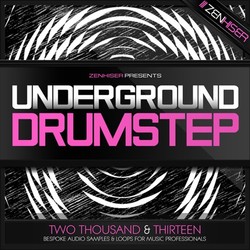 Zenhiser has announced the release of Underground Drumstep, a sample library featuring 450 drumstep sounds and loops.

Zenhiser’s coming at you with full force and arming itself with a studio arsenal of epic drumstep proportions. Sounds full on, well it should be, Underground Drumstep is not for the faint hearted, it’s a massive chunk of truly usable loops and hooks for Drumstep, Dubstep, Trapstep and even Drum & Bass.

Totalling 450 sounds this sample pack is a must for all banging producers, it will deliver hook after hook for your tracks plus a stock drum kit that simply slams, bass hits that roar and fx that swing & slide perfectly. This is drumstep loops and sounds at it’s finest.