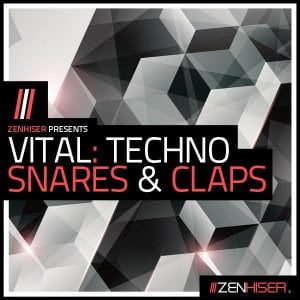 As our Vital series evolves we cover more essential sounds for the Techno genre. This time we’re dedicating the whole pack to Techno snares & Techno claps only. By focusing solely on these sounds we ensure a sample pack of extreme quality, durability and style. Rather than supply a pack of snares and clap sounds covering multiple genres we wanted delve deep and deliver an intricately designed pack of essential drum sounds with the sole purpose of elevating Techno rhythms. With influences ranging from classic Detroit Techno, Berlin’s underground sound through to todays’s hypnotic Techno we’ve created an essential tool of everlasting drum sounds.

This will become your go to pack for snares and claps, it’s that simple. Perfectly suited for Techno, Minimal Techno, Progressive Techno and the classics. All the drum sounds have been created and designed from an array of analogue modules. drum machines and outboard kit whilst using today’s technology to master and refine. By using these techniques we’ve ensured a collection of Techno Snares & Techno claps that will drop perfectly into your future tracks.