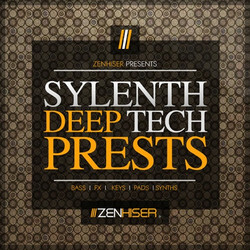 Zenhiser has launched Sylenth Deep Tech Presets, a collection of 150+ presets for the Sylenth1 software synthesizer by Lennar Digital.

Delving deep into the underground realms ‘Sylenth Deep Tech Presets’ takes you on a journey through the late night outings of thumping nightclub dark spaces where organic deep sounds reverberate through the walls and the unison rocking motion of the dance floor expresses the acceptance of the pounding rhythms. Sounds pretty deep right? That’s because this preset pack is deep, really deep. Delivering over 150 presets is a mark of genius on this preset pack, since you will now have enough Sylenth presets to create multiple tracks without losing an array of deep tech sounds to keep both your studio and your mind fresh.

Deep subby basslines, chunky sequences, mind altering synths and twisted fx really does make ‘Sylenth Deep Tech Presets’ lift it’s head above the rest. A whole chunk of studio time has gone into making this preset pack for Sylenth and as long as you have the synth this will inject new life into your tracks. ‘Sylenth Deep Tech Presets’ is brimming with cutting edge, though provoking sounds which innovate Sylenth’s capability to new realms.