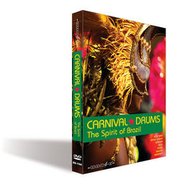 From the product page:

We gathered together 10 professional Brazilian percussionists who play each year at the Rio Carnival and we recorded them in a state of the art studio using close-mics, stereo overheads and distant stereo room mics to capture the pure exhilaration of the performances. And because each of the 10 drummers played the same drum and rhythm in unison, mixed loops with 6 different drum parts have the sound and force of 60 carnival drummers.

The library includes 1400 loops in four different mic positions as well as detailed multi-layered hits of all the drums in the most popular sampler formats so you can create your own rhythms to augment the loops.

Despite the variety, the collection is built on 12 core rhythms.

There are three slower patterns (all typical of Salvador, and Bahia from NE Brazil) with a laid back groove: