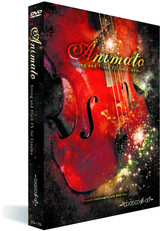 Animato contains 3000 samples and 139 separate Kontakt instruments each with its own custom GUI created especially for this project.

Featuring world-class instrumentalists from the renowned Royal Liverpool Philharmonic Orchestra, Animato is a uniquely realistic, expressive and playable Orchestral Effects library. With a wide sonic range from chaotic, tense effects to beautiful undulating pads. Distant pianissimo sirens can shift seamlessly to fortissimo ungodly screeches all at the simple command of your Mod Wheel.

The 20th century saw the extreme sonic possibilities and expressive potential of classical instruments gradually become standard compositional tools of pioneering concert and film composers. Now at last, many of the best and most exciting possibilities are presented here in an easy to control format utilising the massive sonic capabilities of Kontakt enabling you to change microphone positions or ensemble size at the turn of a knob.

The unique depth and complexity of sound presented here is the product of many instrumentalists playing complex, changing parts together – a quality heard in full live orchestral performances but impossible to re-create using standard orchestral sample libraries, where stacking up many straight-played notes in a sequencer only results in a flat, straight-played sound.

This library is perfect for adding realistic strings and woodwind effects to soundtracks, TV programmes and games but it is also ideal for contemporary commercial producers looking for authentic live sounds that give their productions a leading edge.