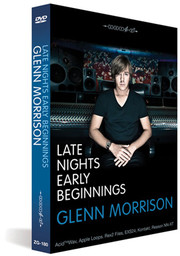 Glenn Morrison is a major rising player in the global dance music scene having hit number one on the Beatport sales chart with the emotional minimal Trance track ‘Contact’ and receiving support from the cream of the world’s top DJs including Sasha, Tiesto, Armin Van Buuren and John Digweed to name a few.

Glenn’s style of music is difficult to pigeonhole into a specific genre and therein lies the beauty of this library. Designed for dance producers specializing in house, techno, progressive house, ambient, downtempo, trip hop, and trance, you’ll find lots of ethereal tones juxtaposed by grainy abstract melodies, as well as shed-loads of big room festival type riffs and industrial type broken-beat loops and single hits which are perfect for techno, house and dubstep.

This huge collection also features two guest libraries from DJ/producers Matt Lange and Luis Junior which include hundreds of unique single hits and loops which are destined to inspire and feature on many forthcoming dance classics.