Zoom has announced the R24, a total music production solution.

Zoom takes its revolutionary R16 and turbocharges it with a sampler and drum machine, 8 additional recording tracks and 6 channels of phantom-power on the all-new R24. The R24 combines four production tools into one incredibly versatile device. In addition to 24-track playback and 8-track simultaneous recording using SD memory cards, the R24 is a digital multi-track recorder, an audio interface, a control surface and a pad sampler.

The R24’s new sampler function consists of 24 built-in voices that can be triggered using 8 pads and 3 bank keys to assign sounds to each track and create loops. Also, you can use the unit’s drum machine and its 400 rhythm patterns to create original backing beats, or simply output a metronome for tempo control. More than ever before, you have all the tools necessary to create studio-quality recordings anywhere. 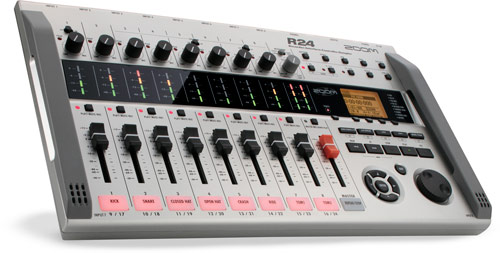