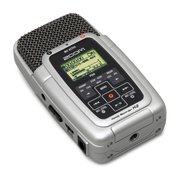 If you’re into field recording you probably already know Zoom’s next model, the H2 Handy Recorder, was supposed to be available already.

But… it’s not shipping yet. Apparently there has been a slight delay because of a last minute improvement to the microphone design. So I am patiently awaiting the arrival of H4’s kid brother.

When comparing the H4 with the H2 it’s actually not so obvious one is better than the other. The H4 has phantom powered XLR inputs and 4 track recording, but the H2 has 4 mics (allowing 5.1 recording) and costs considerable less (plus it looks much better to me).

Here are some of H2’s features:

It’s going to retail for $199 which seems very reasonable for this handsome looking recorder. Unfortunately we’ll probably see a price of over 200 euros in Europe, but that’s not going to stop me from getting one.

200+ Hotkeys to boost your productivity