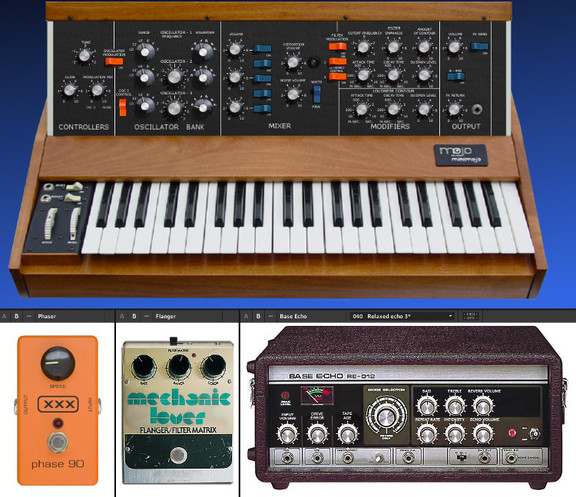 The MiniMojo with phaser, flanger, and base echo devices.

Analog Legacy is the theory of modulating all functions in a synthesizer at all frequencies. The key is to find the right balance of the modulation depth for each frequency. Minimojo is the first attempt to use this theory in practice.

Just to make it clear: The Minimojo is not in any way a copy of MONARK. I have not used or have had access to MONARK during the making of Minimojo. Instead the old ensemble Minimood made by NI in 1999, which has then been modified by several users, has been used as the starting point. I think that the basic structure will be recognizable from that early ensemble.

The ensemble is a free download from the Reaktor User Library. The Base Echo RE-012 (Roland Space Echo RE-201 emulation) featured in the ensemble is also available to download separately. These ensembles require a full version of Reaktor.