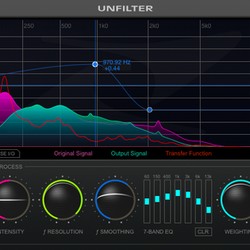 Zynaptiq has announced the release of Unfilter, an adaptive tonal contour linearization effect plug-in for Windows and Mac.

UNFILTER is a real-time plug-in that removes filtering effects, such as comb filtering, resonance, or excessive equalization – effectively linearizing the frequency response of a signal automatically.

The Unfilter plug-in for Windows and Mac (VST/AU/RTAS/AAX) is available to purchase for MSRP $399 USD / 369 EUR incl. VAT.