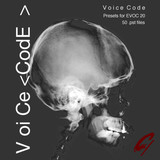 9 Soundware has released Voice Code, a collection of presets for the EVOC 20 vocoder within Apple Logic Pro.

These settings explore its depth and versatility, both as an instrument and as effects processors.

Voice Code includes 50 .pst files and is available to purchase for $14.99 USD.