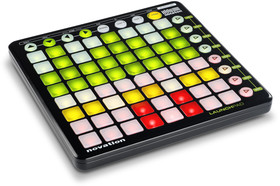 Ableton and Novation have announced the Launchpad, a dedicated controller for Ableton Live, co-developed by Novation and Ableton.

Perfect for DJing, performing live or working in the studio, Launchpad features a multi-color, 64-button grid, control modes for the Session View and Live’s mixer, two fully-programmable User Modes and dedicated scene-launch/function buttons. Despite the big grid, Launchpad is neat, compact and portable: 239 x 239 mm with a slim 24 mm profile and weighing only 717 g.

This features eight audio and eight MIDI tracks plus eight Session View scenes. It also includes Live’s classic effects and even allows custom mapping, making it a basic but adequate out-of-the-box solution for studio and stage. To see the differences between this version of Live and the full version of Ableton Live 8, please check this feature comparison chart.

Launchpad will be available in stores worldwide from November 1, 2009. Pricing is expected to be around $199 USD (MAP) /149 EUR (VAT not included).