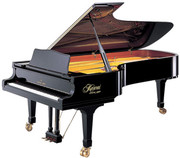 Acousticsamples and Lance Herring have announced the Kawai-EX, a sample library featuring the sounds of a Kawai EX concert piano.

It’s a fabulous KAWAI EX concert grand piano that used to be in the Kennedy center in Washington DC.

The product is already in an advanced state.

The Kawai-EX will be available in the first half of September in Kontakt and GIGA formats. Other formats will follow as free updates (Halion, EXS24 and maybe SFZ).

The sample library will have a pro version with all the above features, and a light version with only one mic position, a single release and only 4 velocity layers.