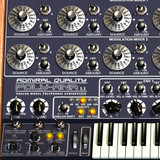 We’ve fixed a small but annoying interface bug that caused a slight jump in the knobs with detents when they were first clicked on. This happened in either relative-circular or linear knob modes (circular mode didn’t have this problem). And we’ve added two new features. Some users with MIDI controllers that produce relatively sparse control streams were reporting “zipper noise” when using the mod wheel, so we’ve added smoothing to the mod wheel input to fix that. And OSX users can now easily change background files without having to edit the .vst and .component package contents. To change backgrounds just drop your favorite Poly-AnaBG.png file into /Library/Application Support/Admiral Quality/ on your Mac’s system drive. (Windows users still place the background PNG in the same folder the Poly-Ana.dll is installed in.)