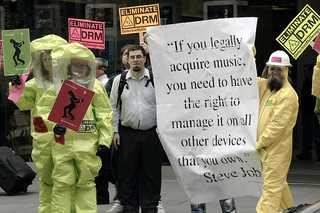 The New York Times reports on Apple’s announcement of removing anticopying restrictions on all of the songs in its iTunes Store, last tuesday at the Macworld Expo in San Francisco.

Beginning this week, three of the four major music labels — Sony Music Entertainment, Universal Music Group and Warner Music Group — will begin selling music through iTunes without digital rights management software, or D.R.M., which controls the copying and use of digital files. The fourth, EMI, was already doing so.

In return, Apple, whose dominance in online music sales gives it powerful leverage, agreed to a longstanding demand of the music labels and said it would move away from its insistence on pricing all individual song downloads on iTunes at 99 cents.

Instead, the majority of songs will drop to 69 cents beginning in April, while the biggest hits and newest songs will go for $1.29. Others that are moderately popular will remain at 99 cents.

The music companies are hoping that their eagerly awaited compromise with Apple will give a lift to digital downloads. They will be able to make more money on their best-selling songs and increase the appeal of older ones.

Anybody excited about this? Anybody think it’ll make a difference?