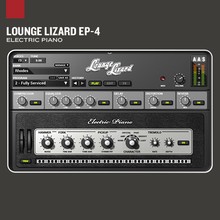 Lounge Lizard EP-4 ships with a new streamlined interface, a new equalizer and compressor module, a new multi-effect processor, brings native 64-bit operation on Mac OS X and more. The factory library has been redesigned with more than 200 presets boasting the sought-after classic electric pianos as well as a great selection of custom pianos taking full advantage of the effects.

“Since its first release more than 10 years ago, Lounge Lizard has always been a favourite among top keyboard players and producers both for live playing and studio work. This is not only because it sounds great but also because it has the feel of a true instrument,” says Marc-Pierre Verge, CEO of Applied Acoustics Systems, “The new Lounge Lizard EP-4 goes even further in terms of faithfulness and sonic possibilities resulting in a piano that is more inspiring and fun to play than ever.”