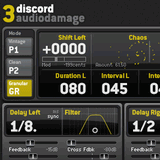 Audio Damage has released version 1.1.0c of the Windows version of Discord3, a multi-effect plug-in for Windows and Mac.

Discord3 is a comprehensive refresh of our popular Discord series of multi-effects. From subtle ADT effects to completely chaotic granular destruction, and everything in between, Discord3 is a capable and broad-reaching multi-effect plug-in.

This update is recommended for all Discord3 users. The OS X 64-bit versions will be released in the near future.

Discord3 is available to purchase as an effect plug-in for PC and Mac (VST/AU), priced at $59 USD.

V1.1.0 update of Mac OS X is out:
This update includes both 32-bit and 64-bit versions of both the VST and AU of Discord3. If you do not use a 64-bit host, there is no reason to do this update at this time.

The Mac OS X version of Discord3 was updated to 1.0.1. The “beep/honk” bug that occurred occasionally in the Granular engine has been fixed. This update is recommended for all users.