Audio-Technica has announced the Sounds of the summer, a social media competition to find the nation’s favourite summer anthem. 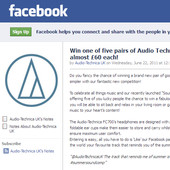 Audio giant Audio-Technica has launched a social media quest to find the UK’s favourite summer track of all time. It is asking its fans and followers to tell the world on its Facebook page what is their favourite summer track and why. To help launch the online competition it has conducted a nationwide study into our musical preferences to find out how obsessed we are when it comes to our music. With singing at work and dancing in the street common place – we’ve certainly got some strange habits!

Almost everyone (96%) claimed they would rather give up films for a year over their music, with a further three quarters (73%) opting to ditch live sport, 37% ditching TV for music, and a dedicated third of people (34%) opting to ditch sex rather than going a year without music!

It also appears we like to express our love of music in public; three quarters of people (74%) admitting to spontaneously breaking into song while driving, a fifth 20% openly singing at work, 15% sing in the street and 11% have even danced in the street while listening to their iPod! Embarrassingly, almost all of us (90%) admit to having been caught doing one of these things!

Audio-Technica senior UK marketing manager Harvey Roberts said, “The UK is a nation with a long and distinguished history in producing world class music, so it’s no surprise to see such fanaticism towards music.

“The research shows that the majority of us actively listen to four-hours of music a day, which equates to more than 60 days a year. That is some serious listening time, and with a fifth of people preferring to use headphones, it makes sense to ensure you’ve got the very best equipment to make your experience as enjoyable as possible.”

The research was conducted as part of Audio-Technica’s ‘sounds of the summer’ campaign, where it is seeking the most popular ever ‘summer’ anthems via it’s Facebook page http://on.fb.me/mBPErZ. Five pairs of top of the range Audio-Tecnica headphones are up for grabs for the most popular suggestions.

The study also revealed that we like to listen to music in some unusual places, with 40% preferring to do it in bed, 27% in the shower, 11% while making love, and an obsessive 7% while asleep!

Audio-Technica also asked people how long they’d be prepared to queue to get tickets for their ‘ultimate’ music festival or summer show and despite the rise in internet bookings, a quarter would wait an hour and surprisingly one in six would be prepared to wait four-hours.