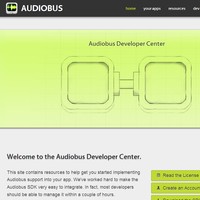 Audiobus Pty Ltd, developers of the revolutionary Audiobus inter-app audio routing app for iPad and iPhone are today making the Audiobus SDK publicly available for all iOS developers. The public release comes after having reached over 100 compatible applications during the SDK’s closed beta.

After a three-month closed beta, the Audiobus Software Development Kit (SDK) is being made available to the public today. The SDK, which allows apps to support the Audiobus inter-app audio routing platform, has already been integrated into more than 100 apps including Animoog, Figure, BeatMaker 2, Auria, and KORG’s entire iOS app lineup. Over 1,000 additional developers have signed up to add Audiobus support to their apps.

The Audiobus SDK beta has already had an extremely positive response from developers. Alex Mathieu, developer of Glitchbreaks said, “It is a fantastic SDK to work with, and the people developing it are super helpful, and extremely responsive.”

Developers can get access to the Audiobus SDK, read the extensive documentation and communicate with other developers at the Audiobus Developer Center.