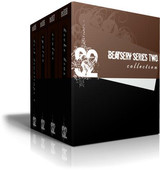 With over 340 loops, more than 180 original samples, plus 4 NI Battery kits, you get an arsenal of beats, and our best value.

Series 2 was built from the ground up, starting with the best drum microphones and Lavry converters. From there, we compressed, recompressed, synthesized, and tricked-out the samples until they became our own. In Series 2, you’ll find everything from solid, fundamental drum hits to the most warped styles.

Each loop in the Collection comes in 24-bit 44kHz wav, REX, and Apple Loops formats. Additional samples are 24-bit wav.

Beatserv Series Two: Collection is available for purchase for $69.99 USD. The sample packs are also available separately, priced at $19.99 USD each.