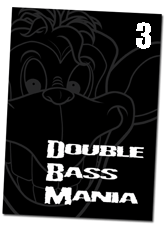 Speed Kills. And Double Bass Mania III brings it faster and harder than anything other sample library on the planet. Double Bass Mania III: Extreme Metal unleashes the fury of the fastest metal grooves with 666+ head pounding drum loops and is designed for extreme forms of metal songwriting.

Double Bass Mania III is all about pure brutal speed. With a cohesive collection of grooves spanning tempos from 180 BPM heavy rock to 240 BPM metal blasts, Double Bass Mania III features exceedingly fast drum patterns and blast beats and will take any metal project to insane levels of ferocity. Blast it out to insane speeds and rhythmic figures and satiate the need for head-pounding speed. Inspired by the speed and brutality of death and black metal, Double Bass Mania III: Extreme Metal is the only commercial drum sample library dedicated to this genre.

Create the heaviest and fastest tracks you could only dream about. No matter what your songwriting goals are – writing demos, recording a future CD release, or expanding your metal chops – Double Bass Mania III kicks down the doors to all things metal.