Blue Cat Audio has announces that it has released it first standalone audio application with Blue Cat’s PatchWork version 1.6. 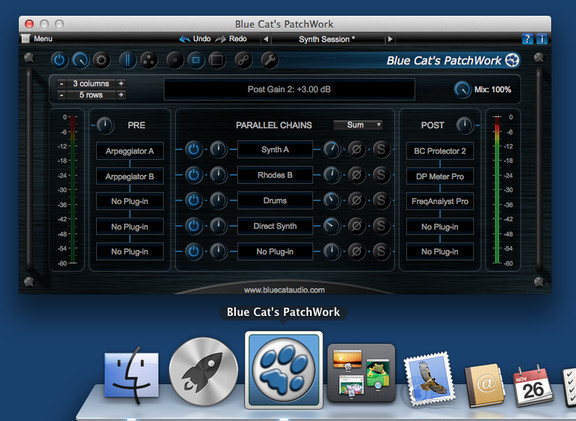 The “universal plug-ins patch bay” is now available as a standalone application for Mac and PC, in addition to all major audio plug-in formats that were already supported.

The new Blue Cat’s PatchWork application is a fast and lightweight host that can quickly load audio effect plug-ins and virtual instruments for immediate usage. It supports up to 8 audio I/O, tempo synchronization, Audio Unit and VST plug-ins hosting (up to 64 plug-ins), copy/paste between multiple applications. Presets created with the standalone application or the plug-in are compatible and can be shared between all plug-in formats to quickly reload effect chains. The application and the plug-ins inserted into it can also be controlled via MIDI.

The update is free for existing customers and is available for download from the same page as the initial purchase (link received by email). Demo versions of the application or plug-in (VST, RTAS, AAX, Audio Unit and DirectX formats) can also be downloaded on www.bluecataudio.com, for both Mac and PC (32 and 64-bit).