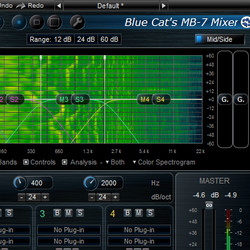 Blue Cat’s MB-7 Mixer is a unique plug-in that splits the signal into several frequency bands and lets you mix and process them as if they were separate tracks.

In addition to the ability to host up to 4 VST plug-ins per band and thus transform any regular plug-in into a frequency-aware processor, Blue Cat’s MB-7 Mixer has now a brand new modular user interface, with lots of new features and enhancements: a spectrogram display, a new presets manager, multiple display sizes, new MIDI and automation mapping capabilities, and more.