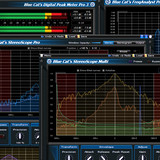 Blue Cat Audio has updated its Analysis Plug-ins for Windows and Mac.

We are happy to announce the update of our audio analysis plugins: the new versions include RTAS plugin format support for Pro Tools users as well as 64-bit applications support for both Mac (Audio Unit) and PC (DirectX and VST). We have aslo fixed a couple of issues (mainly on Mac/Snow Leopard).