Bootsy has released quite a number of interesting freeware VST effect plug-ins for Windows, but unfortunately he hasn’t spend all that much time creating a website yet. I mean, blurb doesn’t exactly do his work justice!

I figured I’d list Bootsy’s plug-ins on this page, alongside the links to download the latest versions.

Update: Bootsy has his own website now so please visit that for the new releases and updates: http://varietyofsound.wordpress.com/

The Nasty plug-in series is entirely dedicated to signal coloring. 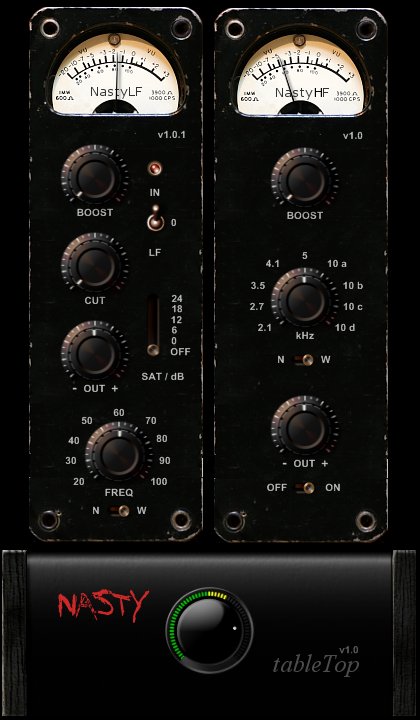 NastyLF – Adding mojo to the lowend
NastyLF is a specific and tuned combination of lowend EQ and output stage. The low frequency EQ in classic boost/cut design offers both: broad ‘oldschool’ as well as rather narrow ‘modern’ curves (switchable) altogether with a variation of that special sounding curve designs when using boost and cut in combination. A new developed output stage offers tasty lowend saturation which can virtually be driven up to 24dB with internal automatic gain compensation.

NASTYtableTop – Signal coloring made easy
NASTYtableTop is a low-mid frequency booster which increases perception in this frequency range by saturation. In subtle amounts this is perceived as a kind of ‘phatness’ while in extreme settings this is going to be perceived as ‘muddy’ and/or ‘distorted’.

NastyVSD is a kind of “summing device” effects simulator and features some of the effects which can appear while going outboard (out of a Digital Audio Workstation (DAW)) and receiving a analog summed stereo mix back into the DAW. When doing this, “safety limiting” or even AD clipping is performed, so this is included in this simulation as well. When driven hard (aka abused), this could be used for maximising purposes as well.

Incorporates some proven dynamic shaping approaches from the past, combined in a seamless fashion with some much more modern concepts in audio processing – the best of both worlds.

Boosty’s plug-ins are now available for downloads from Variety of Sound.