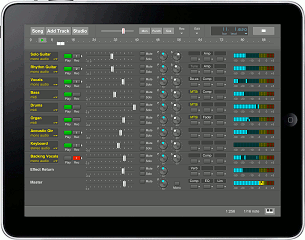 It comes with many high quality audio effects including a guitar amp simulator. Both audio and MIDI tracks can be edited. MIDI editing features include pianoroll, drum and score editors.

The straightforward user-interface has been designed with tape-based recording in mind. It’s easy to use yet powerful.

Changes in MultitrackStudio for iPad v1.7