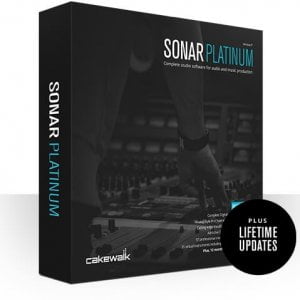 Cakewalk has announced a limited time offer of Lifetime Updates for SONAR Platinum, and a public OS X alpha test phase for SONAR.

SONAR Platinum with Lifetime Updates – From June 1 through August 31 2016, purchasing or upgrading to SONAR Platinum will give the buyer free, lifetime updates of any future core features, enhancements, and fixes.

Customers who purchase SONAR Platinum with Lifetime Updates will never again need to pay for another renewal of the Rolling Updates plan.

SONAR Platinum with Lifetime Updates is available globally through music and sound retailers, and also at the Cakewalk Store.

We receive a lot of requests for a Mac version of SONAR, so we’re very excited to announce SONAR OS X Alpha. This free trial version runs SONAR’s built in plug-ins, and works with any Core Audio compatible audio interface.

Starting in the Fall, please join us in testing out this new frontier for SONAR—and then share your experiences, or find support, in the new SONAR Mac forum.

The Sound Of Hammond sample pack by Frontline Producer