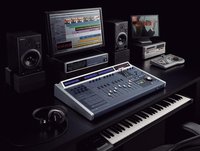 Cakewalk has announced the SONAR V-Studio, the first and flagship product in the next generation V-Studio line of Cakewalk branded hardware and software solutions.

Roland pioneered the concept of combining hard disk recording with an ergonomic control surface. Now, a new generation of V-Studio builds on its legacy in new and innovative ways—combining Roland’s renowned hardware expertise with the power and flexibility of Cakewalk’s SONAR Producer DAW. SONAR V-Studio 700 addresses the gap between under-powered “budget” solutions and over-priced competitive solutions by offering a compelling, feature-rich music production system that is accessible to a broad range of users. And beyond that, the forward thinking design of SONAR V-Studio 700 addresses the needs of post production professionals by incorporating video and image hardware control functionality.