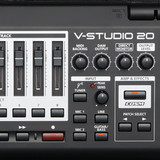 Cakewalk has announced the availability of a MAC Support update for the V-Studio 20, its recording solution which combines the simplicity of a portable, hardware recording system with the power, flexibility, and control of modern computer-based recording.

The V-Studio 20 Mac Support update enables the VS-20 hardware and Effects Editor to be used with all popular Mac-based recording software titles. The update provides Mac users with all the benefits of recording with the V-Studio 20 COSM guitar and vocal effects; and use of the V-Studio 20 hardware as dedicated universal DAW controller. Additionally, both GarageBand and Logic can be further integrated into the V-Studio 20 system using the included custom control surface plug-in included in this update.

The V-Studio 20 Mac Support Update for OS X 10.5 & 10.6 (Snow Leopard) is available as a free download from the Cakewalk website.