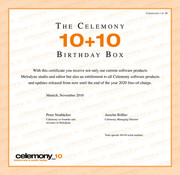 Celemony has announced its 10 year anniversary, offering an opportunity to win 10 years of Celemony’s future.

We’ve been around now for 10 years; and so, for 10 years, has Melodyne. We would like to express our thanks with ten of the legendary wooden boxes in which the first Melodyne was delivered. Each box contains a license for Melodyne editor, for Melodyne studio and for all Celemony software products released in the next 10 years. Whoever gets a box will receive all the software products and updates released by Celemony until the year 2020 free of charge.

To participate in the prize draw, all you have to do is leave us a birthday greeting. Starting now: in our Forum, on our Facebook wall, or on our MySpace page—whichever you like. Three people whose names are drawn from among those leaving greetings will each receive one of the ten boxes. We are most looking forward, naturally, to greetings with a touch of originality—a short film, a Melodyne anecdote, a poem or something of that kind. The fourth box will go to the person who comes up with the best greeting, selected by our jury. The closing date for entries is the 16th January 2011, the last day of the NAMM Show, where Melodyne was presented for the first time 10 years ago.*