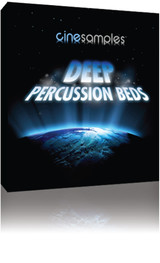 Cinesamples has announced the release of Deep Percussion Beds, a Kontakt sample library featuring epic and emotional percussion loops for the film, tv and game composer.

Percussion loop libraries have been, and will continue to be, a necessary tool for composers on the go. They can transform a cue into something completely different with just a few clicks and one pass on the keyboard.

We decided to have a go at an orchestral percussion loop library, but of course in the cinesamples way. We noticed many incredibly bombastic, active and gigantic sounding loop libraries yet we weren’t able to find a loop library suitable for the other moments we are called on to score. A dialogue scene with underlying tension, or the quieter moments before all hell breaks loose, a troubling flashback to a long forgotten memory, or a scene where the director says “I think the music is saying too much here, perhaps we don’t need music till the next part. Yes, the music needs to say much less or nothing at all (the editor nods his head in firm agreement).”