The Citarum river near the Indonesian capital of Jakarta, displays the abuse that mankind has subjected it to. 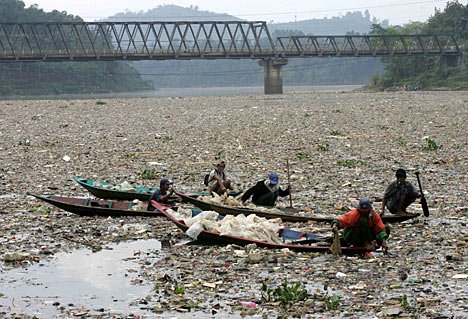 From the Daily Mail:

More than 500 factories, many of them producing textiles which require chemical treatment, line the banks of the 200-mile river, the largest waterway in West Java, spewing waste into the water.

Where once fishermen cast their nets, now people are foraging for rubbish. Sad story…

Disgusting it may be.But the truth is out there.Look pat the propaganda and you will find it.
Some years ago some think tank of smart guys Professors and such made a statement that had to do with the maximum amount of population our earth can support.If memory serves me correct the number given was 5 1/2 billion people.After that the earth will be in trouble.The latest figure or estimate foe today is 7 billion and growing at a rate of 1 million a month.How long do you think it will take before we go to war over water.There are water shortages all over the globe and things are getting worse.There is only so much water to go around.The water we consume and pollute is the same water that was around one thousand years ago.It comes down as rain goes up as water vapour and over and over.Only lately in history some of the water has stayed down on earth.Remember High school chemistry when they told you the human body consists of 60% water.You have all these bodies walking around and they need more water in order to function.So let some smart Mathematician figure out when we will hit
a point where we run out of it.

shut up you stupid geek

dude! this is freaking disgusting man!

Hello again!
Keep track of the cleanup of the Citarium river and check back into it every 6 months.As the old saying goes “Make money today tomorrow is some one elses problem.After all the more things change in the third world countries the more they stay the same.I was in the Phillipines in the 1970 and again in the 1980 and I noticed the unchecked logging.Remember Ormoc where 3000 people got flushed out in the ocean and all the landslides that are happening down there.Sometimes when you have time read a book called “Island of the blue dolphins”The book describes our future.Thanks again for your comment.

You probably didn’t read my long post, but the Asian Development Bank sealed the deal on a massive project to clean up the Citarum in January 09, and their projects do get done. They typically cover the entire cost with a match from the country, usually in-kind, so I’m pretty sure cleanup is underway. There are many stages and many stakeholders, plus tons of education to be done so governments and people change their habits as work is done in their area. You might be able to check progress on their site – I haven’t had time to see whether any is posted yet.

Perhaps the US has been asked to help with a related project, bit given the recession and environmental problems we have here, I doubt any funding would be available in the near future.
Holly

Hi!
Its me again.Lately I heard the USA is helping to clean up this river with a 500 million $ cash injection.I wonder how much of this money will reach the river.Probably less than 1 %.After all the goverment will hold talks how to best approach this problem.And this will take years and by that time all the money is spend (corruption is a way of life)and the will be back asking for more.Some body still remembers the tsunami a few years ago and all the money sitting in New York.None ever was spend for the victims and the money always ends up in the pocket of the officials in charge.You think I’m joking.Go back in recent history and add up how much money staring in the 1950’s was send to Africa and nothing has changed 60 years later.

This is shocking. I just received an e-mail that opened my eyes. It would be interesting to know how drinkinging water would be supplied, via convential treatment or membranes?

If anybody knows, please let me know. I would like to help. praveng@ncp.co.za

People are so freakin’ disgusting.

Isn’t Indonesia one of the strict moslem country.I guess corruption is not mentioned in their holy book.After all when one revers the god Mammon all other gods move aside and established laws do not apply because they interfere with the accumulation of money.

all i thought only the pasig river of the philippines needs the world for salvaging. indonesia must have the same mind as to the filipinos as how we try to save our pasig river. i believe and i expect a lot form the project initiated by the an organization in our country. in seven years, i expect to see a newer pasig river nearly to become one of the primary sources of the country’s drinking water. save yours now. it needs time, actually more time. but time counts! do not waste.

My primary interest in this is the quality of life for Indonesians, rather than role of the pollution cleaned up in a global sense, but your comments are correct.

Saving the World’s Most Polluted
River
JAKARTA , Indonesia (OOSKAnews) Passengers flying in and out of Jakarta, Indonesia’s capital, are
often puzzled by what appears to be a long, narrow landfill
winding across Java, one of the islands that comprise Indonesia.
It’s not a landfill – it’s the Citarum River, often called the world’s
most polluted. Photos show bank-to-bank solid refuse, and the
river teems with contamination and waterborne illnesses.
Like many Asian rivers, used over thousands of years, the Citarum
is the primary source of water for more than 23 million people and
the production point for 20 percent of Indonesia’s industrial output.
On its 270-kilometer journey its basin drains about 13,000 square
kilometers, providing water for:
• Three hydroelectric stations generating 1,400 megawatts
• Crop irrigation for some 240,000 hectares
• A limited system of sanitary toilets – most of the human
and animal waste along its banks flows untreated into the river
• Bathing, laundering, cooking and other household uses,
and
• Drinking – Jakarta’s 23 million people gets 80 percent of
their water, including drinking water, from the Citarum at the end
of its flow.
Southeast Asian industry has exploded over the past 15 to 20 years,
with industrial output per capita increasing by almost 50 percent,
according to a 2006 UN report. Urbanization and industrial growth
haven’t been matched by environmental development.
For the Citarum and other rivers, that has meant ever-increasing
untreated effluent from plants manufacturing products from textiles
to steel, according to studies underwritten by the Asian Development
Bank (ADB) and completed by Indonesia’s Irrigation and
Water Resources National Development Planning Agency, which
presented the Citarum’s problems and vision for solutions at the
2008 World Water Week conference.
Additional Citarum contaminants include fertilizers and solid
waste generated by communities along the river that have neither
trash removal nor disposal. Increasingly, heavy flooding is a problem
because of deforestation and climate change, and the hydroelectric
plants report rapid turbine corrosion due to pollution.
“Pollution levels now compromise public health,” according to the
ADB.
Statistics offer dramatic confirmation. At the head of the Citarum,
Bandung’s human and industrial wastes flow into Saguling, the
first reservoir in the basin. Biological and biochemical oxygen
demand (BOD) concentrations at Saguling reach as high as 130
mg/L during the dry season. In contrast, water treated for use in
developed countries would have BOD of 20 mg/L or less.
“The Citarum River basin urgently needs improved management
and significant infrastructure investments,” said Christopher Morris,
a senior water resources engineer in ADB’s Southeast Asia
Regional Department. “ADB assistance will bolster Indonesia’s
efforts to pursue effective integrated water resources management
in the basin.”
In December the bank committed $500 million USD in loans to
clean up the Citarum over the next 15 years. Because of the large
sums and long timeframe, local concerns about whether all residents
will benefit from the cleanup, and fears that funds might be
lost or diverted over time, the cleanup will be funded in tranches as
the projects progress.
S O U T H E R N & E A S T E R N A S I A 4
Copyright © 2 0 0 9 OOSKAn e w s , I n c .
January 6 , 2 0 0 9
Matching funds will be provided by the private sector, which is
expected to include businesses along the river, NGOs, donors, and
governments from the national to community level. Technical assistance
to build an organization and buy-in that will maintain the
cleanup will be ongoing.
The first project, costing $50 million USD, will be water treatment
in Jakarta, cleaning up the West Tarum Canal, connecting the
Citarum to Jakarta’s water supply.
Currently, affluent families drink bottled water, while poor families
do their best to boil water for household use, though the process is
costly and releases kerosene fumes.
The initial emphasis on Jakarta has raised fears in upstream areas
that they will be left out after the biggest constituencies have been
served.
“ADB’s initial assistance will provide safe water supply and sanitation
facilities for poor families who currently use water from the
polluted canal for bathing, laundry and other uses,” said Morris. “It
will also allow the cultivation of an additional 25,000 hectares of
paddy, benefitting 25,000 farming families.”
The plan, developed by the ADB and the national irrigation and
water agency, is comprehensive. In the long run, it will support
construction of a number of solid waste facilities and wastewater
treatment plants. Access to toilets and trash removal services will
be developed.
Supply will increase, too. The program will provide bulk water
supply for an additional 200,000 households in Jakarta, and will
ultimately increase Jakarta’s water supply by 2.5 percent annually
and resolve “critical” water supply shortages in Bandung at the
head of the Citarum, according to the ADB.
Last, the plan includes funds to assist people who will be displaced
by the cleanup, plus restoration of environmental assets, including
reforestation.

I’m doing a project on this too… But the sour truth is that a lot, even though not the majority, of the pollution is caused by us in our very own homes and offices… I realized while I was scouting out information for this

I’m a freelance writer, and happy to report that the first steps of a massive cleanup were approved in December, 2008, and will begin this year with the West Tarum Canal from the river to Jakarta’s water supply.

Dan, I’m doing an article for a water publication and would love a copy of your project if any of it is emailable.

i am doing a school project on this and the way these people’s lives are being destroyed because of the industry is sickening and should be stopped!

This is so scary, how people tend to abuse nature, the same thing our life depends on.