CodeFN42 has released Chordz, a free VST plug-in that allows a user to trigger full chords by playing single notes. 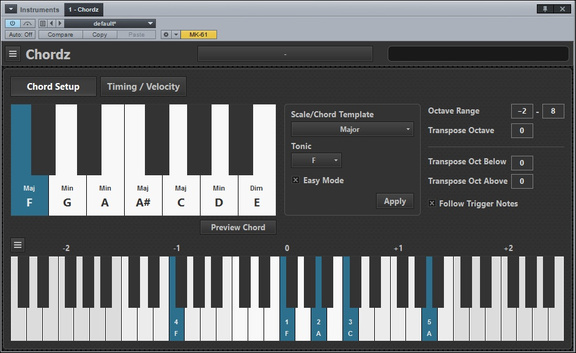 Each trigger note is associated with a separate chord. Each chord may consist of any number of notes. Play complicated chord progressions with one finger, with a MIDI keyboard or a drum-pad, or trigger chords from single notes added in a DAW’s piano roll.

When “easy mode” is enabled, a user can play the chords in any scale using only the white keys, with “C” always being the I chord. The black keys can then be used for chord variations (for example “C#” to trigger a major seventh or ninth chord, while “C” triggers a regular major chord).

The keyboard can be divided into three zones, one for playing chords, the other two (one below, and one above, the chord trigger zone) for playing single notes. Each zone can be independently transposed up or down by any number of octaves. This allows a user to play chords with their left hand, while their right hand plays the melody.

The plug-in supports optional velocity scaling and randomization for each note of the chord. Another feature is the start and end delay (this can also be randomized), which can be used to, for example, emulate strumming or to create more unpredictable results (works great with sounds with a long attack and/or decay, such as pads or strings).

Chordz for Windows (VST) is available as freeware.