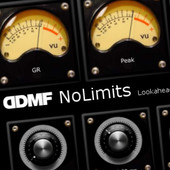 DDMFs has released version 1.1 of NoLimits, a mastering limiter plug-in for Windows and Mac.

While the overall ‘simple’ approach has been maintained, it is now possible to finetune the limiting algorithm to a much greater extent via an ‘advanced’ part of the user interface.

The user can now choose the lookahead, attack and release times as well as the output ceiling to his liking. Also, the internal DSP algorithm has been partly redesigned, leading to noticeaby less distortion artefacts. The transient stage of NoLimits can now be operated in linked- or non-linked stereo mode.

NoLimits for Windows and Mac (VST/AU) is available to purchase for $20 USD. The update is free for all existing users.