Mark Batty Publisher has announced The Book of Ice, a multidisciplinary, multimedia exploration of Antarctica by Paul D. Miller a.k.a. DJ Spooky. 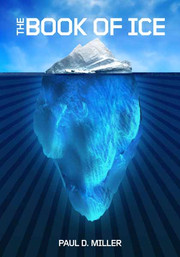 In The Book of Ice, Paul D. Miller, a.k.a. DJ Spooky, applies his artistic sensibility, scientific curiosity, and sweeping perspective to his study of Antarctica, diving in and returning with an astounding remix of essays, music, photographs, interviews, architectural plans, and propaganda. Envisioning a future revolution sparked by “The Manifesto of the People’s Republic of Antarctica,” The Book of Ice travels through space and time to tell the story of an uninhabited, nationless continent.

With the images from his journey to the bottom of the world, original artwork, and re-appropriated archival materials, Miller offers an utterly new vision of Antarctica. As Brian Greene, author of The Elegant Universe, remarks in his foreword, The Book of Ice is “infused with Paul D. Miller’s iconic imagination…. [It] casts a new and different light on this frozen terrain that has long been Earth’s most mysterious region. The book amplifies Antarctica’s frozen isolation, punctured now with ever greater frequency, and reveals its own set of hidden connections, remixing ice anew.” Drawing on the continent’s rich history of inspiring exploration and artistic endeavors, Miller uses Antarctica as a point on entry for contemplating humanity’s relationship with the natural world.

Not confined to paper, The Book of Ice is a hybrid work containing QR codes that readers can use to access Miller’s companion film, North/South, among other media. Part fictional manifesto, part history, and part scientific rumination, The Book of Ice furthers Miller’s reputation as an innovative artist capable of turning old into new.

More information: The Book of Ice