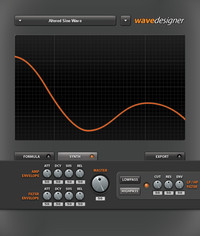 DNR Collaborative has announced Wave Designer, a VST instrument plug-in which is aimed at reducing the time required to make single-cycle waveforms.

Wave Designer is an ongoing project which is still in the early stages of development, which is a very unique and useful tool concept that allows users to create waveforms and export them to a number of synthesizer formats in order to be used as oscillators for the particular synthesizer.

The software will be shipped as a plug-in instrument, allowing users to create waveforms visually and then preview the sounds in real-time with their MIDI keyboard.

Wave Designer is available to pre-order for $29 USD until June 30th, 2012. The final price for all others will be $79 USD upon release.

Pre-order customers will receive a receipt for their purchase, an account on the DNR website and access to each beta version upon completion and notifications of when they are available. The first beta version will be available in approximately 10 days (6/21).