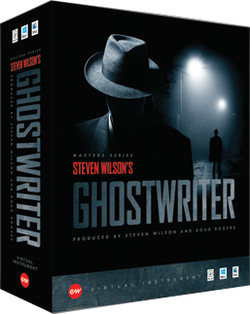 EastWest has announced the release of Ghostwriter, a virtual instrument library by Steven Wilson and Doug Rogers.

For the first time ever, this new instrument presents some of Steven’s most innovative sounds, as well as a selection of especially created instruments and replications of some instantly recognizable classic sounds originally created by other legendary producers and engineers.

These organic and inspirational sounds can be used as part of the fabric of complex music productions, or as the basis for cinematic soundtrack-based music, providing a ready-made selection of sonic building blocks with years of expertise and sonic innovation already embedded in them. In addition some more straightforward and raw instruments are included, which can be manipulated via the powerful Ghostwriter instrument interface to create your own unique sounds.

The virtual instrument is available to purchase for the introductory price of $395 USD. Until January 31st, 2014, it can be ordered on a Western Digital USB3 (with USB2 compatibility) Hard Drive at no extra charge ($70 USD value).