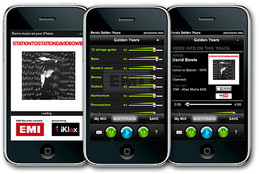 Ever keen to push the boundaries and pioneer technology, Bowie has, once again, afforded his fans the unique opportunity to access original multi-tracks, allowing them to become remixer and create their own version of ‘Golden Years’, only this time they’ll also be able to share their remixes with friends.

Fans can make their remixes, using eight stems (bounced down from the original 16 tracks), featuring Bowie’s lead vocal, 12-string guitar, bass, drums, guitar, harmonium, percussion (including blocks, congas, claps) and backing vocals. Additionally, they can SHAKE the player (see Notes to editors), which allows for random track selection and “shuffles” track mixes. History is made here for you to discover, remix, and enjoy with friends. The stems for this App were specifically created by ‘Golden Years’ and Station To Station’s original producer Harry Maslin.

This is a revolutionary experience for music fans to recreate their own versions of one of popular music’s most iconic songs.

To coincide with the launch of the App, EMI will release a ‘Golden Years’ E.P. – available on CD, 12” and digital download – featuring the original single version and four brand new remixes of the track created by DJ’s Jeremy Sole, Anthony Valadez, Eric J Lawrence, and Chris Douridas from the US radio station KCRW. These remixes will be exclusive to this E.P. As Station to Station was recorded in Los Angeles, it was fitting for some of KCRW’s leading tastemakers to take on the task. Each DJ took a unique path in recreating, deconstructing or re-imagining the classic song.

The Golden Years app for iOS will be available June 6th, 2011.