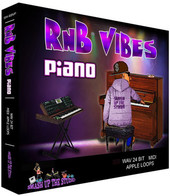 Equinox Sounds has released RnB Vibes: Piano, a collection of RnB piano progressions by Smash Up The Studio.

What better, when making an RnB record is to have the piano parts played by someone who does it professionally? Smash Up The Studio have once again called upon the keyboard skills of Steve Burton, who has worked on RnB tracks for artists such as Whitney Houston, Janet Jackson, Babyface, Jodeci, Sounds Of Blackness amongst others.

RnB Vibes: Piano is available as a digital download for $29.95 USD.